Systemic lupus erythematosus (SLE) is a chronic remitting-relapsing autoimmune disease characterized by T cell autoreactivity and autoantibody production. The pathogenesis of SLE is incompletely understood, however, genetic, epigenetic, and environmental factors contribute to SLE development [1]. A substantial body of evidence supports a key role for epigenetic dysregulation in the pathogenesis of SLE [2].

We have previously demonstrated that proinflammatory epigenetic changes occur in naïve CD4+ T cells as the disease becomes more active in SLE patients. These epigenetic changes precede corresponding transcriptional changes and poise naïve CD4+ T cells for Th2/Th17/Tfh immune responses, while suppressing regulatory T cell pathways such as TGF-β signaling [3]. We also provided evidence to suggest that this “epigenetic shift” is likely mediated by the enhancer of zeste homolog 2 (EZH2), which is a core component of polycomb repressive complex 2 (PRC2) and mediates tri-methylation of lysine 27 on histone 3 (H3K27me3) [3]. Indeed, we subsequently demonstrated that CD4+ T cells from SLE patients are characterized by increased expression of EZH2 and higher levels of H3K27me3 compared to healthy controls [4]. In addition, levels of two microRNAs, miR-26a, and miR-101, which are known to target and downregulate EZH2 were reduced in SLE CD4+ T cells [4]. Further, inhibiting EZH2 significantly improved survival and ameliorated lupus-like disease in MRL/lpr lupus-prone mice [5].

The mechanisms underlying EZH2 upregulation in SLE CD4+ T cells remain unknown. It has been demonstrated that in cancer-infiltrating T cells the expression of miR-26a and miR-101 is sensitive to glucose availability and glycolysis [6]. Recent evidence suggests that glycolysis is increased in SLE T cells and that restoring normal glucose metabolism might be of therapeutic benefit [7]. In addition, the mechanistic target of rapamycin complex 1 (mTORC1) has been shown to be a metabolism sensor in immune cells [8], and is activated in CD4+ T cells from SLE patients [9]. Blocking mTOR activation was associated with promising clinical and cellular response in SLE patients [10]. In this study, we explore the relationship between glycolysis, mTORC1 signaling, and EZH2 expression in SLE CD4+ T cells. 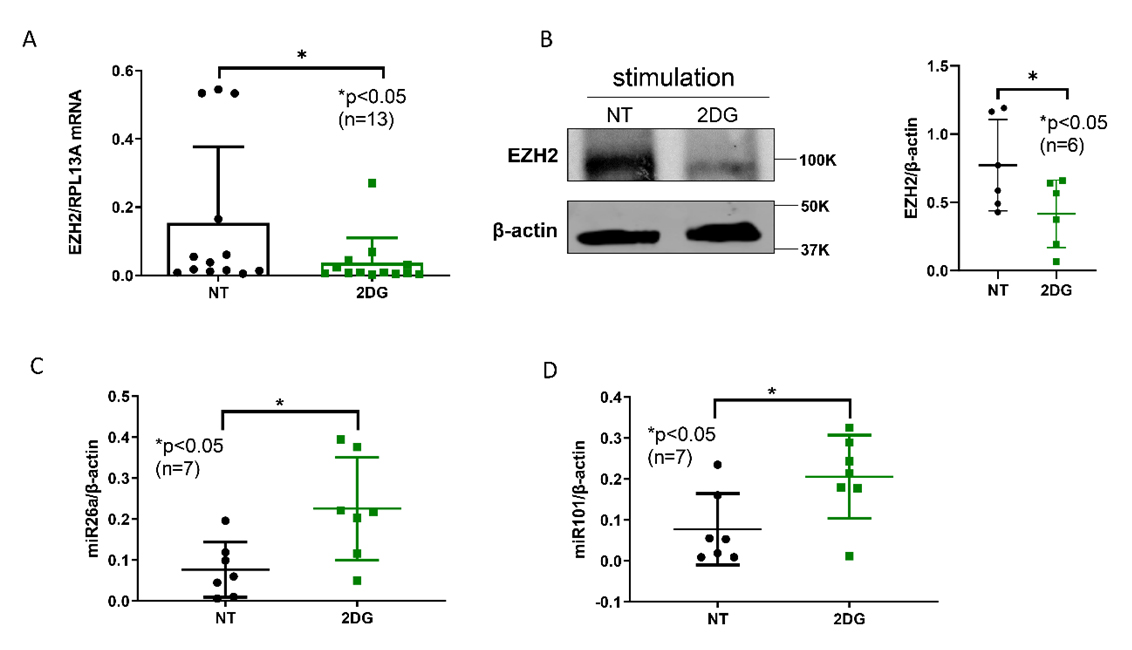 Oxidative stress is linked to SLE pathogenesis and disease flares in SLE patients, at least in part through activation of the mTROC1 signaling pathway [15]. To investigate the effect of oxidative stress on EZH2 expression, we treated CD4+ T cells isolated from SLE patients with and without H2O2 (50 μM). H2O2 significantly increased EZH2 expression in SLE CD4+ T cells (Figure 3A). Surprisingly, miR-26a and miR-101 levels were also upregulated by H2O2 treatment (Figure 3B,C). These results suggest that oxidative stress upregulated EZH2 expression, via mechanisms that might be independent of post-transcriptional regulation by miR-26a and miR-101. 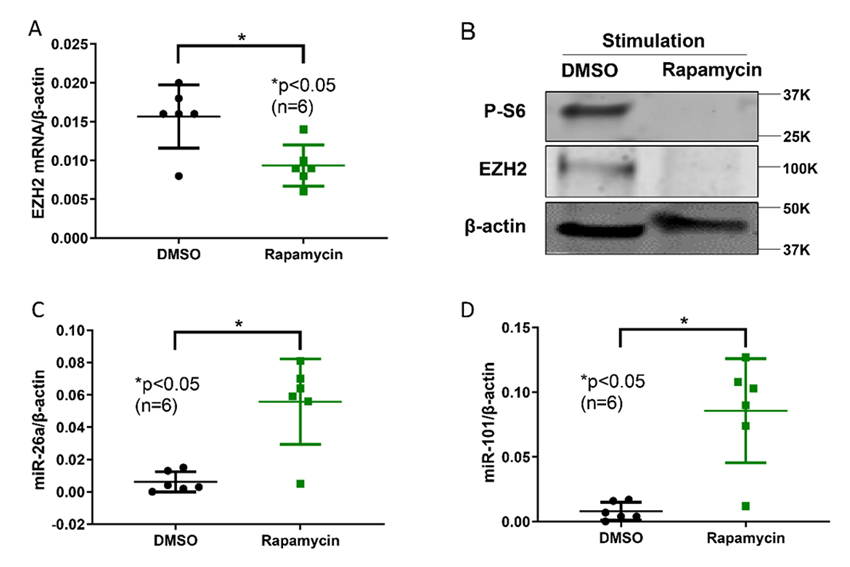 The aim of this study was to explore upstream regulating mechanisms of EZH2 in SLE CD4+ T cells. EZH2 is an epigenetic regulator that has been linked to epigenetic changes observed in naïve CD4+ T cell as the disease becomes more active in SLE patients [3]. Our model suggests increased EZH2 activity, due to suppressed post-transcriptional regulation, when SLE disease activity is increased [3]. Post-transcriptional regulation of EZH2 is mediated at least in part by miR-26a and miR-101, which are sensitive to glucose availability and are regulated by glycolysis [6]. Further, we have previously demonstrated a pathogenic role for EZH2 overexpression in SLE CD4+ T cells. EZH2 mediates abnormal CD4+ T cells adhesion in SLE by epigenetic dysregulation of the junctional adhesion molecule A (JAM-A) [4]. Herein, we demonstrate that inhibiting glycolysis or inhibiting mTORC1 signaling attenuates EZH2 expression in CD4+ T cells isolated from SLE patients. Our findings also suggest that these effects might be mediated by restoring the expression levels of miR-26a and miR-101, which are downregulated in SLE CD4+ T cells compared to healthy normal controls [4]. Post-transcriptional regulation of EZH2 by miR-26a and miR-101 has been well established [16,17]. In addition, we demonstrate that oxidative stress, which stimulates mTORC1 activation, results in EZH2 overexpression in SLE CD4+ T cells. Taken together, these data provide a link between activated mTORC1/glycolysis in SLE CD4+ T cells and epigenetic dysregulation mediated by EZH2.

It is worth noting that inhibiting glycolysis using 2-DG did not appear to significantly reduce global H3K27me3 levels in SLE CD4+ T cells. It is possible that more sensitive assessment tools are needed to detect less robust changes in histone modifications or that H3K27me3 changes induced by 2-DG are site-specific and would be detected using chromatin immunoprecipitation-based methods. Alternative explanations include the possibility that 2-DG might also affect the levels or activity of histone demethylases, compensating for the effect of reduced EZH2 on H3K27me3 levels. Indeed, a crosstalk between H3K27me3 demethylases KDM6A/B and metabolic programs in T cells has been recently reported [18]. It is important to emphasize that EZH2 mediates pathogenic effects in SLE through mechanism that extend beyond its enzymatic function as H3K27 tri-methylase. For example, EZH2 affects DNA methylation and we have previously shown that increased EZH2 leads to DNA demethylation and overexpression of JAM-A resulting in pathologic consequences such as increased CD4+ T cell adhesion in SLE patients [4]. The effects of specific metabolites in the glycolysis pathway on epigenetic dysregulation in SLE remains to be investigated.

In summary, our findings suggest that EZH2 overexpression in SLE CD4+ T cells is induced by mTORC1 activation and increased glycolysis through effects on post-transcriptional regulation by miR-26a and miR-101 (Figure 4). These data suggest that interaction between immunometabolism and epigenetic regulation might be involved in the pathogenesis and disease flares of SLE. Suppression of EZH2 expression in CD4+ T cells might be mediating at least some of the therapeutic effects observed with blocking mTOR activation and with glycolysis inhibitors in SLE and lupus-prone animal models. 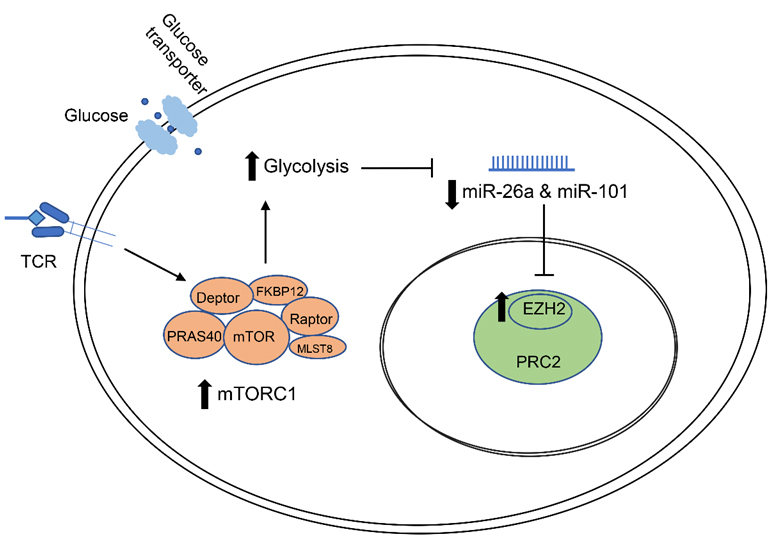