Hapres| Home| Information & Guidelines | Editorial Board | About Us

Background: Interleukin-37 (IL-37) is member 7 of the IL-1 family and inhibits pro-inflammatory factor activities. Cervical carcinoma is a malignant tumor associated with inflammation. The roles of IL-37 in the occurrence and progression of cervical cancer have not been elucidated. This study investigated the roles of IL-37 in the proliferation, survival, invasion, and migration of cervical cancer cells.

Cervical cancer is the most common female reproductive system malignancy. Its incidence and mortality are rapidly increasing worldwide [1]. Cervical carcinoma is an infectious disease of the cervix. Human papillomavirus (HPV) infection is thought to be the primary cause cervical carcinoma. Herpes virus II, Neisseria gonorrhoeae, Chlamydia trachomatis, and bacterial vaginosis have also been associated with cervical inflammation [2]. Inflammation plays a major role in cervical cancer occurrence and progression [3]. Studies of the molecular mechanisms of cervical cancer occurrence and progression have revealed that cervical tumor cells secrete large amounts of inflammatory factors, which could affect cellular signaling pathways, subsequently inhibit immune recognition of tumor cells, and affect tumor cell proliferation, invasion, and metastasis [4]. The roles of various inflammatory factors in the malignant phenotype of cervical cancer are not yet fully understood.

Interleukin-1 (IL-1) is an 11-member family of cytokines that regulate inflammation [5]. IL-37 is member 7 of the IL-1 family and was first discovered in 2000 by sequence alignment. It is was located on chromosome 2 with 5 different splicing subtypes [6]. Studies have found that IL-37 plays an important role in multiple inflammation-associated diseases [7, 8]. Only a few studies have reported on the biological roles of IL-37 in cancer. IL-37 was found to mediate renal cell carcinoma [9] and hepatocellular carcinoma anti-tumor activities [10]. One study reports, IL-37 as suppressing cell proliferation and cervical cancer cell invasion by downregulation of STAT3 phosphorylation [11]. This study explores the roles of IL-37 in cell proliferation, survival, and metastasis, as well as the associated signaling, in cervical cancer cells.

HeLa cells at the log phase were trypsinized and seeded at 2 × 106 cell/dish into 10 cm dishes. After incubation in 2 % fetal bovine serum for 24 hrs, the culture medium was changed to DMEM which contained 10 % fetal bovine serum. Different concentrations of IL-37 (final concentration: 0 ng/mL, 50 ng/mL, 100 ng/mL, and 200 ng/mL) were added to cells and continuously cultured for different periods of time. Cells were then collected and centrifuged at 1200r/min for 5 min to remove supernatants. After washing with 1 × PBS, cells were fixed in absolute ethanol overnight at 4°C. Propidium iodide (PI) dye was added, and cells were incubated at 4°C for 30 min followed by flow cytometry assay.

Transwell chambers were coated with matrigel overnight at 4°C and the basal membrane was hydrated with serum-free culture medium for 1h at 37°C to perform an invasion assay. Treated HeLa cells were seeded into the upper chamber of the Transwell chamber. RPMI 1640 medium was added into the lower chamber. Twenty-four hours later, the membranes were stained using Giemsa dye and cells were numbered by counting using an inverted microscope. The artificial basal membrane was excluded from the invasion assay in order to perform a migration essay.

HeLa cells were cultured in 10 cm dished with DMEM medium containing 10 % fetal bovine serum. Cells at the log-phase were treated with 200 ng/ml of IL-37 for 48 hrs. Cells were then homogenized and total protein was loaded on an 8 % SDS-PAGE gel (40 μg per lane). After transferring proteins to the PVDF membrane, the membranes were blocked with 1 × TBST buffer (1 × TBS buffer with 0.1 % Tween-20) containing 5 % non-fat milk for 1 hr at room temperature (RT), followed by incubation with a primary antibody (1:2000 dilution for phospho-STAT3, total MMP-2, MMP-9, and β-actin) overnight at 4°C and further incubation for 30 min at RT. After washing with 1 × TBST, membranes were incubated with an HRP-conjugated secondary antibody (1:2000 dilution) for 1 hr at RT. After washing with 1 × TBST for 3 times, immune reaction was visualized by incubation with chromogenic substrates and exposure to X-ray films. Band optical density was scanned and analyzed using a Quantity One software package.

Data were analyzed using SPSS17.0 statistical software and presented as mean±standard deviation (SD). Comparison between the two groups was performed using a student’s t-test. Statistical significance was defined as p < 0.05.

Flow cytometry was used to detect apoptosis and analyze the cell cycle of IL-37-treated HeLa cells. Treatment with 50 ng/mL, 100 ng/mL, 200 ng/mL, and 400 ng/mL of IL-37 for 48 hrs significantly increased HeLa cells numbers in the G0/G1 phase, but decreased HeLa cell numbers in the S phase, as compared to cells treated with 0 ng/mL of IL-37 (p < 0.05) in a concentration-dependent way. IL-37 significantly increased the percentage of apoptotic HeLa cells (p < 0.05) in a concentration-dependent manner (Table 2). 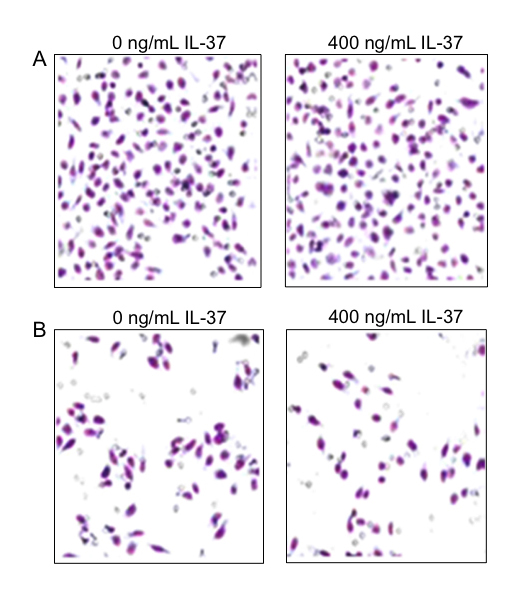 The phosphorylation of STAT3 proteins and the expression of MMP-2, and MMP-9, proteins in IL-37-treated HeLa cells was measured using Western blot. Results showed that phospho-STAT3 and total MMP-2 and MMP-9 protein levels significantly decreased in HeLa cells after treatment with 400ng/mL of IL-37 for 72 hrs compared to cells treated with 0 ng/mL of IL-37 (p < 0.05, Table 3, Fig. 2). 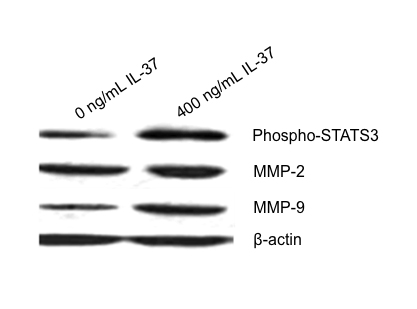 Table 3. IL-37 effects on the STAT3 phosphorylation and MMP-2, and MMP-9 protein, expression in HeLa cells

The association between cervical cancer, and infection, with human papillomavirus, and other pathogens, has long been known. The inflammatory response resulting from infection is one of primary driving mechanisms of cancer development. The inflammation-induced infiltration of immune cells and their secretory cytokines, chemokines, and growth factors are known contribute to the malignant traits of cervical cancer [12]. This study demonstrated that IL-37, an IL-1 family anti-inflammatory cytokine, significantly inhibited cervical cancer cell proliferation, survival, invasion, and migration. The anti-cancer effect of IL-37 in cervical cancer cells is associated with its ability to decrease STAT3 phosphorylation, and downregulate MMP-2 and MMP-9 protein expression.

Previous studies have demonstrated that IL-37 may decrease the activities of inflammation-related kinases, such as FAK, STAT1 and MAPK during tumor occurrence [20]. STAT3 was frequently found to be overexpressed in tumor cells, and tissues, and to control tumor cell growth through regulating the expression of a number of oncogenic genes [21].