Fatty acid esters of hydroxy fatty acids (FAHFAs) have been identified as a novel class of bioactive lipids with beneficial effects on insulin secretion, glucose metabolism and metabolic inflammation. Palmitic acid-hydroxystearic acids (PAHSAs), a subgroup of FAHFAs, are reduced in serum and fat of insulin resistant mice and humans. A recent paper complements previous studies by demonstrating that exogenous PAHSAs act as insulin sensitizers in mice with a strong action on liver through both direct (inhibiting cyclic AMP signaling in hepatocytes) and indirect (reducing adipose tissue lipolysis and its contribution to hepatic glucose production) effects.

In a recent follow-up study, the authors utilized euglycemic-hyperinsulinemic clamps for detailed metabolic characterization, and confirmed PAHSAs’ role as insulin sensitizers [5]. To this end, the authors performed chronic dosing studies wherein PAHSA were delivered to aged chow- and HFD-fed mice via osmotic mini-pumps. The authors discovered an important role of PAHSAs in augmenting insulin’s action to suppress endogenous glucose production (EGP) by the liver. Of note, evidence from both mice in vivo and cultured hepatocytes indicated that, besides insulin sensitizing, PAHSAs inhibit EGP directly by suppressing glucagon-dependent cyclic AMP-signaling, involving an unidentified Gαi protein-coupled receptor. Another important observation in these experiments was that PAHSAs suppress lipolysis in WAT both in vivo and in explants ex vivo. Artificially raising plasma free fatty acids (FFA) in mice on HFD by IntralipidTM administration partially prevented PAHSA-dependent insulin sensitization, suggesting that the observed suppression of WAT lipolysis is part of PAHSAs’ mechanism of action. Taken together and as summarized in Figure 1, the authors complement their previous studies and demonstrate that a moderate elevation of circulating PAHSA in vivo has pronounced effects on systemic glucose homeostasis in mice, with both liver and WAT as target tissues. Some aspects touched in these studies stimulate further mechanistic questions. For example, why do PAHSAs stimulate glucose uptake only in specific skeletal muscle subtypes but not others? Why does PAHSA treatment decrease liver glycogen in HFD-fed mice while it increases it in chow-fed mice? Answering these questions, together with identifying relevant PAHSA receptors in hepatocytes and adipocytes, will be important for better understanding PAHSAs’ insulin-sensitizing actions. Also, potential PAHSA effects on immune cells such as macrophages need to be studied, as they may modulate inflammation and thereby metabolic states.

Beyond these questions, the pioneering FAHFA studies described above have opened several avenues for research to further explore the biology of this fascinating lipid class. Great potential lies, for example, in future studies addressing cellular mechanisms of PAHSA action. The fatty acid receptor GPR40 has been implicated in controlling PAHSAs effect on insulin action and secretion in studies using a pharmacological GPR40 antagonist [4]. Moreover, siRNA knockdown was utilized to demonstrate involvement of the fatty acid receptor GPR120 as a mediator of PAHSA-induced glucose transport in adipocytes [1]. One problem in these cell culture experiments performed with PAHSA so far is that the concentrations needed for activity were orders of magnitude above circulating levels. A potential explanation for the discrepancy is that in vivo, FAHFAs are predominantly found as esters within triglycerides [6]. It would be interesting to test what proportion of exogenously added PAHSA is incorporated into liver triglycerides, as these could be rapidly secreted as VLDL. Triglyceride-PAHSA liberated from VLDL by action of lipoprotein lipase within organs could then result in local PAHSA concentrations that are much higher than those of free FAHFAs in blood. Several enzymes with FAHFA-degrading activity have been identified [7,8]. Whether these play a role in vivo and also finding out how FAHFAs are synthesized is critical to understand the physiological effects and pharmacodynamics of these novel lipids. A more detailed knowledge of FAHFA metabolism, not the least FAHFA formation and degradation, might thus lead to a better understanding of FAHFAs acting as signaling molecules. 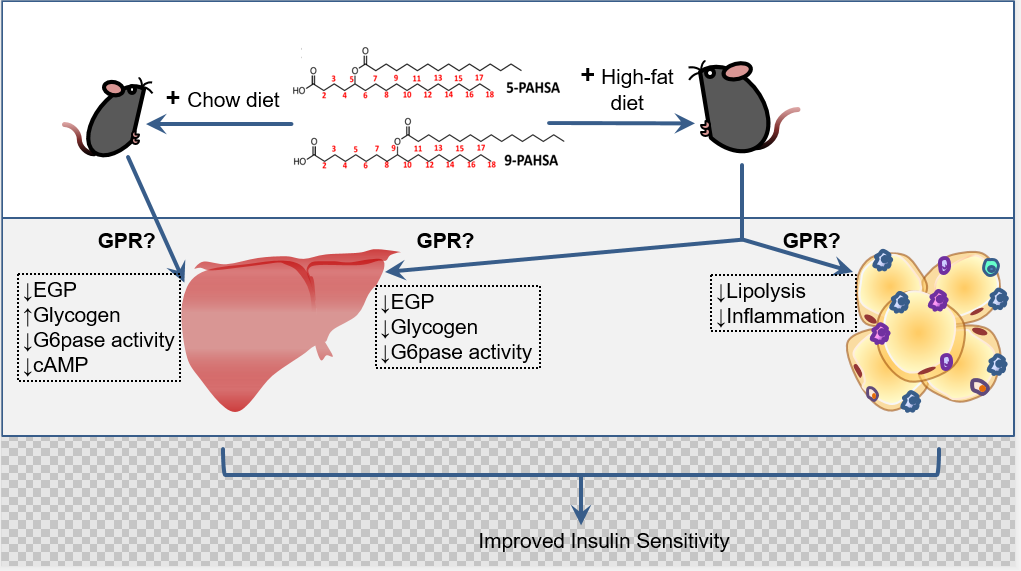 Figure 1. Schematic representation of PAHSAs’ role in liver and adipose tissue. Administration of 5- and 9-PAHSAs results in improved insulin sensitivity due to various metabolic effect on liver and adipose tissue in chow and high-fat diet fed mice. The effects are mediated by G-protein coupled receptors (GPR) that needs to be defined for the organ-specific pathways.

Another aspect important to ascertain the therapeutic relevance of FAHFAs is their presence in food including plant oils. In this context it is of note that insulin-sensitizing effects of PAHSAs were not observed in chow-fed or HFD-fed mice when PAHSAs were administered orally using olive oil as vehicle [9]. Although high PAHSA bioavailability was found in these experiments, no effect on glucose tolerance test or insulin secretion was observed. One explanation could be that olive oil itself contains high levels of FAHFAs and that this masked PAHSA effects. Olive oil alone, does indeed improve oral glucose tolerance in HFD-fed mice, which was e.g., demonstrated by Syed et al. [10], an effect that might in part be due to FAHFAs. Thus, future studies are warranted that carefully dissect the physiological roles of dietary versus endogenous FAHFAs and will eventually allow to determine the therapeutic potential of PAHSAs and related molecules.

The authors declare that there are no conflicts of interest.

LS and JH are supported by the Deutsche Forschungsgemeinschaft (SCHE522/4-1; HE3645/10-1) and MK is supported by Alexander von Humboldt Postdoctoral Research Fellowship.