Mitochondrial membrane potential (ΔΨm) is directly linked to ATP synthesis and as such its regulation is essential for cellular viability. Until now, it was thought that the inner mitochondrial membrane (IMM) was one homogenous surface, with uniform properties throughout. But a study published in a recent issue of The EMBO Journal describes heterogeneity in ΔΨm. The authors demonstrate that individual cristae within the same mitochondrion can have differing membrane potentials and could thereby potentially function as independent bioenergetic units. This might have consequences for local reactive oxygen species production or even the release of mitochondrial DNA. Further understanding this process could have important therapeutic consequences in disease states in which the regulation of ΔΨm becomes dysregulated.

Mitchell’s chemiosmotic theory states that a proton-motive force across the inner mitochondrial membrane is responsible for driving the synthesis of ATP [1]. In this way, ATP synthesis is directly derived from mitochondrial membrane potential (ΔΨm) which is generated as protons are pumped outward from the matrix. Built into this hypothesis is the conception that the inner mitochondrial membrane (IMM) as one homogenous surface, whose properties are uniform throughout. Disturbances in ΔΨm can result in decreased ATP synthesis, the production of reactive oxygen species (ROS) and cell death. As such, the maintenance of homeostatic ΔΨm is critical for cell viability and understanding this process is of fundamental biological importance. Until now, attempts to measure ΔΨm have relied insufficient imaging techniques including as light microscopy that lacks sufficient spatial resolution to visualize the ultrastructure of the IMM or electron microscopy which requires freezing or fixation of mitochondria and therefore precludes any direct measurement of structure and ΔΨm in living cells. Wolf and colleagues [2] now describe heterogeneity in ΔΨm in different cristae, highlighting added complexity in our understanding of how mitochondria function. To determine ΔΨm at the resolution of individual cristae, the authors have developed a method involving the LSM880 microscope with Airyscan and STED microscopy. Harnessing this new technology, the authors demonstrate that individual cristae within the same mitochondrion can have differing membrane potentials and could thereby potentially function as independent bioenergetic units.

Importantly, they suggest that interventions that drive mitochondrial depolarization may affect some cristae while sparing others. Given the essential role of ΔΨm in cellular homeostasis the implications of such “protection” of discrete pockets of ΔΨm following mitochondrial perturbations could be profound. These data support a model in which cristae within the same mitochondrion behave independently so as to prevent the failure of specific cristae from spreading dysfunction to the rest. Electrochemical autonomy of cristae protects the mitochondrion confronting a bioenergetic crisis, where dysfunction of one or more cristae would not inevitably cause the entire organelle to fail. One important limitation of this work is that depolarization of the inner mitochondrial membrane was achieved artificially by laser induced stress focused at one end of the mitochondrion. Whether physiological mitochondrial stressors, which may be unbiased to a specific IMM site would impose a similarly heterogeneous depolarization remains to be determined.

The authors provide data to support these findings in a range of cells including MEFs, HeLa cells, Hap1 cells, L6 myoblasts, H1975 cells, primary mouse hepatocytes, and human fibroblasts. It would be interesting to examine these parameters in immune cells such as macrophages and T cells where mitochondria not only serve as ATP producers but as discrete signaling hubs that alter the immune function of these cells. Metabolic and redox alterations are central to macrophage and T cell polarization following infection and tissue damage. Mitochondrial hyperpolarization in these cells is associated with increased ROS production and is crucial for macrophage and T cell activation [3] and the production of inflammatory mediators [3]. ROS production in macrophages is thought to be derived from complex I in a process termed reverse electron transport (RET). RET requires a high membrane potential as a prerequisite, but this can potentially be damaging to the cell itself. Perhaps discrete mitochondria in macrophages may engage simultaneously in both RET to generate ROS and oxidative phosphorylation to produce ATP and prevent cell death (Figure 1).

This work raises several intriguing questions-how does the formation of supercomplexes alter these discrete pockets of ΔΨm? Could this hetero-potential model allow certain cristae to harness complex II-driven versus complex I-driving respiration in parallel? Have the assessments of ΔΨm over-simplified our interpretation of the role of ΔΨm in certain circumstances? Could this allow us to detect pathological changes in cristae architecture associated with disease at any earlier stage? Does looking at the mean ΔΨm using traditional methods provide a representative image of the mitochondrial health of the cell? A key question in mitochondrial biology concerns the release of mitochondrial DNA. Might this occur in regions with specific levels of ΔΨm, such that the mitochondria are not so severely damaged as to incur cell death? 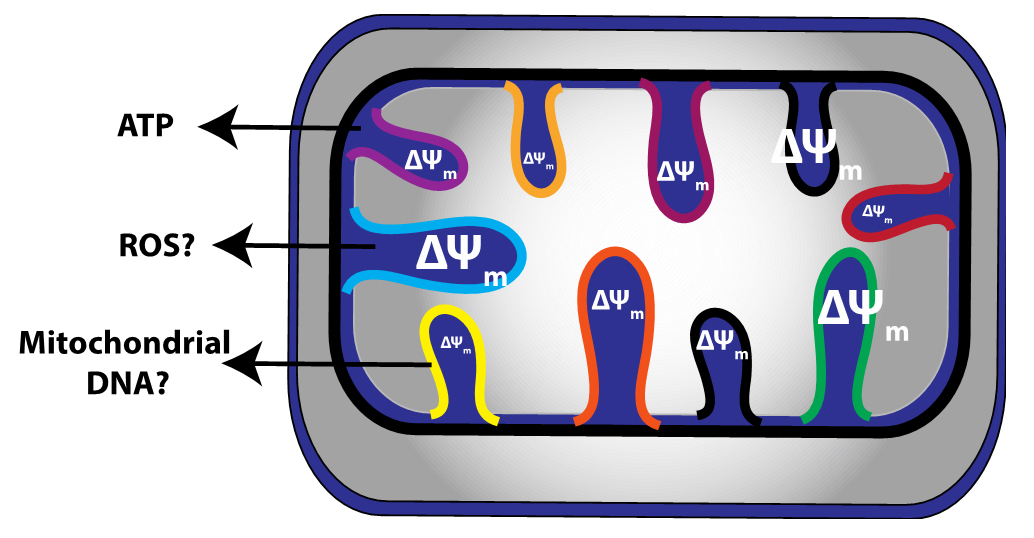 As well as furthering our understanding of basic cellular biology, this technology could have implications for diseases associated with mitochondrial perturbations. For example, immunotherapy involving the adoptive transfer of tumor-specific T cells, which aid in the treatment of cancer, depend on the long-term survival and antitumor immunity of adoptively transferred CD8+ T cells which is intimately linked to the metabolic fitness of these cells. As such, it has been reported that transfer of T cells with low mitochondrial membrane potential, as an indicator of improved metabolic fitness, is associated with better long-term in vivo persistence and an enhanced capacity to eradicate established tumors compared with cells with high mitochondrial membrane potential [4]. The current study suggests that identifying metabolic fitness in this way may be an over-simplification and it would be intriguing to determine if heterogeneity in ΔΨm in different cristae might actually be a key feature of the persistent T cells.

This intriguing observation therefore adds to our knowledge of how mitochondria function, indicating heterogeneity in what was once thought a highly homogenous system. How this process is regulated and its role in diseases involving the mitochondria are important next steps.

This work is supported with funding from The Wellcome Trust and The European Research Council (ERC-AdvG Grant agreement ID: 834370).